Pic of the day: Sun Spots and Solar Flares, Courtesy of Nasa 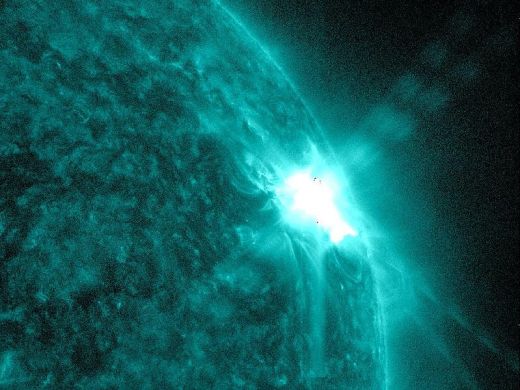 THE SCORPION AND THE LADYBUG

A Scorpion befriended a Ladybug who became a loyal companion
to him. A time came when she struggled to cross a challenging
and dangerous river, and so the Scorpion offered to take her
to the other side on his back. He had come to care for her
and promised he would never harm her. But, safely across the
river, he allowed his tail to dip upon her with its venomous
sting. As she lay in greatest pain, she said, “… but, you
promised… why?” He shrugged and said, sadly, “Because it is
my Nature.”

Regardless of our wishes, or even our intent,
it is to our Nature alone that we will be faithful

I was moved to put one of Aesop’s fables here in today(there were several others I could have gone with) after reading about AIG thinking of “joining” a suit against the United States government. Apparently there are some people there that are unhappy over the fact that they feel that their stockholders got shortchanged in the bailout.

This is not a surprise, and anyone who is surprised needs to seriously re-examine who they are talking about. This is the same company that made so many bets in so many directions before the beginning of the financial crisis that it alone nearly toppled the entire economy. And then, you will recall they then had the nerve to pay the people who put the nation and world in such peril bonuses for a job well done.

They are, in other words, known for being both monumentally stupid and very ballsy. A combination that rarely goes over well, particularly as they are trying to save face with an ad campaign.

Ya know if these morons spent their money more wisely and actually knew what they were doing, neither they nor we would have been and would not be in nearly the mess we were and are in. They made the mess, and are unhappy over having to live with the consequences.

Oh, and the lawsuit that they are joining? The part that makes it sound like someone else started this and they are just joining in? Do you know who is actually bringing the suit?

Former AIG CEO Maurice Greenberg. And his holding company, who happen to be shareholders in… you guessed it. AIG.

There is even noise being made that AIG is being forced into this lawsuit.

I don’t think anyone is buying the fact that the shareholders of AIG were hard done by when we pulled their bacon out of the fire. I tell you simply, there is no better scenario for them back in 2008 when this happened than what happened. Bankruptcy would have gone very badly for them, the would have had to liquidate. And those shareholders would have ended up with squat. They will have a very hard time convincing a judge that they would have been better off in a different scenario and that the governments terms were too harsh.

Good luck with that, AIG. Enjoy the public ass whipping you are about to receive, which you whole-heartedly deserve.

And the ad campaign? It’s called “Thank you, America.” I guess you could give the lawsuit a name as well. “Fuck you, America” would fit the attitude of Mr. Greenberg and his misguided and ill-advised lawsuit and the false framing of AIG “joining” a lawsuit begun by AIG shareholders for AIG shareholders just about right.

That’s it from here, America. G’night.