“It’s alright, hon” he tells her, “Everything is going to be ok”.  She does not seem to understand, or care, and simply continues to cry inconsolably.

“You hate me! You do! You don’t want me here!” She cries, half yelling into her tear soaked pillow in the darkness of the unlit room.  Light pours in from the next room, but only just enough to make out her silhouette laying on the bed, shifting and twisting uncomfortably on her side of the bed. A little bit disconcerted, but yet undaunted, he continue to try to appeal to her in some fashion.  First the attempt to make a point that he is not angry, and that, no matter what, he stills love her.

She knows this, but this isn’t what she needs to hear, and so is unfazed.

He decides it has become time for a different strategy, in part because he has things to do, but mainly he can’t stand to see her like this.

So he decides to use  his sense of humor, such that it is.  Simple stupid jokes, usually pretty bad ones, mostly of a slightly perverted variety, meant to elicit a smile and an  “Ewwwwwwwwww”  The first few fail, but he can see that the crying has lessened somewhat. She has heard all of the jokes before, knows them forwards and backwards, so usually the jokes bond as well as bring a smile and a laugh.

But it’s hard to tell whether he is having any effect, though she would be giggling at the idiotic humor if she were in a better place.  So he goes for the gusto, and start singing badly out of tune made up on the spot dirty variations of well known Christmas songs.  This works, and by the end of it, she is singing along, making up words, funnier and dirtier than his and the crying stops altogether.

After a minute of trading bad jokes about nasty things to do with peppermint sticks and various body parts, he holds her, and she him, and he tells her it’ll be alright.

“Are you sure?  You seemed mad at me before”

“I wasn’t mad” he tells her, as she blows her nose, drying her still wet eyes “I was busy, and annoyed that things were not working the way I wanted them to.  You read me wrong there, hon”

“Are you sure?”  There is a mixture of pleading and hope in her eyes and her voice as she asks the question.

So I replied “Yes, I Love You, now let’s dance”

That so many writers have been prepared to accept a kind of martyrdom is the best tribute that flesh can pay to the living spirit of man as expressed in his literature. One cannot doubt that the martyrdom will continue to be gladly embraced. To some of us, the wresting of beauty out of language is the only thing in the world that matters.

Viddy of the day:  Dean Martin – Let it Snow!

Pic of the day:  Pieter Bruegel the Elder, Gloomy Day 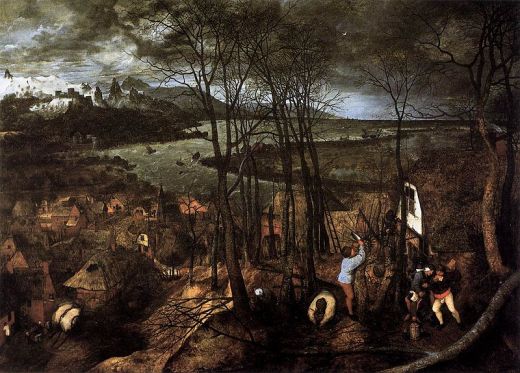 That’s it from here, America.  G’night.